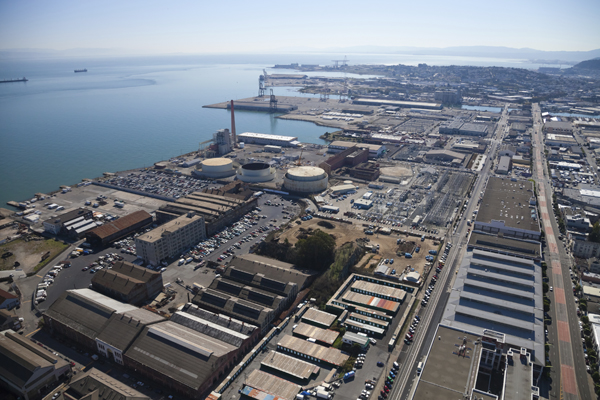 The Project
The site is a 65-acre industrial area located just south of Mission Bay and east of the eclectic Dogpatch neighborhood. It is home to several Port of San Francisco tenants, including a working ship repair company, a radio broadcasting unit, an arts group, and a variety of storage uses. The more than 30 buildings on the property include one of the largest clusters of historic, maritime structures on the west coast. The goals of the Master Plan were to create a plan to guide the rehabilitation and adaptive reuse of many of the existing structures, while providing developable locations for new, infill buildings and public access to the waterfront.

Our Role
EPS was engaged by the Port on this project between 2007 and 2015. EPS first led a multi-disciplinary effort to produce a Preferred Master Plan for the site. The Master Plan provided a framework for the restoration of historic structures, integrated open space and public access at the site, and developed a viable financing strategy, which incorporated funding sources for of the above goals, as well as for costly infrastructure improvements and environmental remediation. Building on the Master Plan process, EPS assisted the Port in developing an RFQ, interviewing short-listed developers, selecting a preferred developer, and supported negotiations.

Outcome
A deal term sheet was adopted by the Port Commission and San Francisco Board of Supervisors in 2014 and the project received a positive vote by the citizens of San Francisco in 2014. The term sheet includes vehicles to pay for the $185 million in infrastructure costs and participation arrangements for the Port.